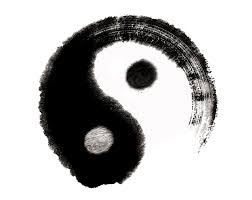 The Yin and Yang concept is the basis of the Taoist philosophy. It has had impact on the entire Eastern philosophy. It became the base of the martial arts, Qi Gong, Tai Ji Quan, Chinese medicine or the art of feng shui. The correlation between yin and yang is present in what we do, what is happening to us, or in the way we develop. It is in our studies, work, relationships, cooking, in health issues, and of course, in art, too.

The Concept in Practise
Human body has a natural ability of self-healing. Whenever we go beyond our limits it urges us to stop. For example, when we feel pain in the knee we can ignore it or listen to it attentively. At listening to it we can understand what causes it, discover its reason, and do something to eliminate the cause. Thus, we have a possibility to remedy our knee, to heal it, and by so doing to ensure its further use. But we can also choose the second way – the way of ignoring the pain. For a short time, we can as if rise above the problem, but this can take us as far as the operation table. And from there, return to active life is longer than after a short break dedicated to healing.

From the point of yin and yang, use of knee is the yang principle. After some activity (yang), our knee needs relax, our attention, and care (yin). Otherwise, the balance cannot be restored. Ignoring the pain prevents yin to be active, and so yang, activity, is multiplied by another yang, another action. This is obviously an excess, which leads to injury, operation, and thus elimination of next activity. Moreover, the subsequent yin principle – relax and recovery then takes longer. The Yin and Yang concept teaches us, inter alia, to avoid extremes before they appear, and in doing so, to enjoy a longer active life.

“Either/Or” vs. “One and the Other”
On contrary to the European dualistic philosophy, where black is black and white is white, and between them there is a dividing line, the contradiction of the yin and yang concepts lies in their complementarity and interdependency. The Chinese signs for yin and yang contain the meaning “hill”. The hill represents existence as such, around which yin and yang act in constant interaction and modification. Yin is the reverse, shady, dark side of a hill. Yang is the sunny, light, bright side of a hill. However, none of them is better or worse. Even though the sunny side offers joy, fertility, and warmth, it is at the same time more inclined to wearing out, drying out, and perishing. The shady side of a hill does not offer us so many apparent results or fruits, but in its humidity and coldness life evolves more slowly, thus maintaining its life substances for a longer time. Therefore, both principles are important for life in the macrocosm of space, but in the microcosm of our body as well, and they need each other.

Yin and Yang and Human Body
Taoists consider human body a microcosm of the universe. They say that human nature is also governed by the constantly changing contradictory powers of yin and yang. A human is a balanced combination of yin and yang with the basic “dosage” of yin from the mother and yang from the father. Moreover, a human absorbs the qi of the yin energy field of the Earth and the yang energy field of the Heaven. The Heavenly yang qi descends towards the Earth and a human continuously “absorbs” it by the cranial vertex – the spot called “Baihui” (English translation: Hundred meetings, the point GV 20). The qi of the Earth rises from the Earth core and projects itself on the surface. A human takes it in through soles, in the middle of which there are points called “Yongquan“ (English translation: Gushing Spring, the points KI 1) through which we are able to connect with the earth qi whenever it is necessary. At dancing we make a bond with the floor, we ground ourselves using these points and their cooperation with our centre of gravity in order to establish stability in the posture or a move. Thanks to this, we are stable and secure in our legs, the floor is our substantial support, we bounce and land better, in contact improvisation or in dance with a partner the connection of the gravity centre with the Earth helps us transform the weight of the partner into the Earth instead of retaining it in our body with our muscles.

Our metabolic functions are based on alternation of yin and yang. For example, breathing is a beautiful manifestation of a regular changing of yin and yang; also food processing, where filling takes turn with emptying. Even the “architecture” of the human body and its usage in motion has its yin and yang sides, attributes, processes, and principles. The Chinese medicine, Tai Ji Quan, or Qi Gong engage them through conscious approach.

What is inside is yin. What is outside is yang. The outer parts of body are therefore yang; the inner parts are yin, on contrary. Lower parts of body, those closer to the earth yin qi, are yin. Upper parts of body, those nearer the heaven, are yang. Compared to the front part of body, the back part is more solid and harder, hence it is yang; the front one is softer and more delicate, thus yin. When we curl up in a ball, the front part is hidden inside and protected; the harder yang back is on the surface, protecting the inside. The left side corresponds to the yang qi. It is directed to the sunrise (sun and light are yang). The right one is connected to the west (sunset) and the approaching of darkness; so it is yin.

Each of the main internal body systems comprises of one pair of the major organs, one of which is yin and the other yang. Yin kidneys are linked to yang urinary bladder, yin lungs are linked to yang large intestine, yin heart is linked to yang small intestine, yin spleen is linked to yang stomach, yin liver is linked to yang gallbladder and yin pericardium is linked to yang triple burner. Of course, also meridians, which relate to these organs, are classified to yin or yang. Since yin is inside, the yin meridians run along the inside of the arms and legs and the front part of body. The skin structure on these parts of body is usually softer and less hairy than on the outer sides of body. It is thus less protected, because due to its nature of being inside yin is already protected by yang. Since Earth is yin, the yin meridians start in its vicinity, i.e. at the bottom and they run upwards. The yang meridians, on contrary, are on the surface; they run along the outer, rougher and more hairy parts of body and on the back, and from upside down. 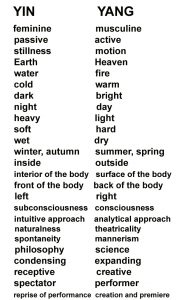 And what does all this division serve for?
It may all sound too philosophical and theoretical, but the yin and yang principle plays an indispensable role also in the dance and theatre practise. It is part of the kinetic, spatial, and music dynamics, but also of respecting natural dispositions of body and possibilities of move. Yin surfaces have different potential of movement than the yang ones. Perceiving body through this concept, at observing dancers at their body moves, rotations, or jumps, we can see how some dancers and movers, to their disadvantage, often use the energy of their body in a completely opposite way. In doing so, the body is put under more pressure, it creates blocks, loses the balance, hence loosing the energy. When we know how use our body in the right way, following the principles of yin and yang, we are able to direct our moves efficiently and in a totally different manner – whether in a training or in a stage presentation. This concept helps us to better understand our body in each and every moment.

Qi energy in our body can either condensate and absorb – that is inwards, into the body, which means yin, or it can act contrarily – expand and project itself from the body outwards, which represents yang. The yin surfaces of body are places of absorption and condensation. This is where the body takes the qi in and then lets it flow down – to the lower dantian (energetic centre in the area of our physical centre of gravity) and to earth. Yang surfaces are places of projection and expansion. Through them qi is transmitted from the inside of the body outside. If we know where and how much to absorb, where and how much to expand, in that part of the body the qi can flow and be used efficiently for moving. This helps to create such arrangement among the particular parts of body which enables to use the body structure to the maximum of what was “designed” by the evolution. This applies also to joints. Every joint has a yin and yang side. The yin one is on the inside, where it bends; the yang one is on the outside, where the skin stretches. In ballet, and, unfortunately, also in some modern dance techniques, at which the pedagogue does not pay a lot of attention to the body, the yin (inside, rear) side of the knee is, for example, incomprehensibly expanded. The dancer is standing on their legs stretched to the maximum, often creating the “X” shape, which flexes even more in time. The knee is forced backwards; the patella is pushed into the joint in order to straighten the leg. Thus, the dancer presses the front part of the knee to the other side. This causes the energy to block, which leads to gradual destruction of the joint and weakening of the natural stability.

Constant strive for balance is one of the main characteristics of the universal principle of yin and yang. The Taoist philosophy encourages us to observe what happens naturally, to notice what causes the natural change of yin to yang, and vice versa, and not to go against it, but to follow it.

Yin and Yang in the World of Motion