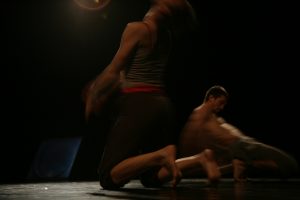 Knees are the most commonly injured joints of dancers and other movers. But our dancing really depends on them – on their health, strength and well-being. Indeed when dancing, we place significant stresses upon them. In addition to supporting almost our entire bodyweight. Movement invention requires great adaptability, fast responses, stability, and complete flexibility. With contemporary “floor work” techniques, in which the movements are performed on the floor and on the knees, meaning we demand an almost iron like strength from our knees.

A complex mechanism
Despite its seemingly innocuous appearance, the knee belongs among the most complex of joints. The correct function of the knee joint is reliant upon the co-operation of several parts of a chain (the pelvis, hip, upper leg, lower leg, ankle and foot) that must all work together and depend on each other for function and movement.

The knee bones are the deepest structure; they provide strength, flexibility and stability by utilising the entire skeletal system. It is the connection of the femur with the bones of the lower leg (tibia) and a part of the Patellofemoral groove and the kneecap (patella). The surfaces of the bones that are part of the hinge joint are covered with articular cartilage. Together with synovial fluid, cartilage allows the bones to move freely while reducing friction and protecting the bones from wear as the joint moves.

The function of the knee ligaments is to attach bones to bones and give strength and stability to the knee in the individual positions that movement requires; the menisci help the ligaments with that.  The muscles provide the source of movement. Thanks to their ability to shrink and release, the knee is able to bend, thus offering the body numerous possibilities for movement. The knees are at the same time interconnected by these connective tissues with the other parts of the body – primarily the hip and ankle joints. The condition of the knees thus affects them, and vice versa; the correct use of these joints, as well as the quality of the tendons connecting the muscles to the knees, affects the condition of the knees themselves.

Of course, blood vessels and nerves also pass through the knees.

The knees are nourished by blood transported through blood vessels; nerves transfer brain impulses to trigger movement, and in return deliver information about the condition and movement of the knees to the brain. Such information includes pain, one of the warning signals that all is not well with the knee. The energy pathways – the Meridians – also pass through the knees. They link the knees to important organs and their systems – the spleen and stomach, liver and gallbladder, kidneys and urinary bladder. The spleen provides the muscles with nutrition, while the liver is responsible for feeding the tendons and ligaments, their strength, elasticity, endurance and the ability to give muscles “drive”. The kidneys are responsible for the health of bones, cartilage and menisci. In the dance profession, we often encounter knee strains, stretching or tearing of the ligaments, meniscus damage or water on the knee. Each of these problems can restrict our plans and activities. And it’s then up to us to ensure we start listening to our knees to avoid more significant problems. 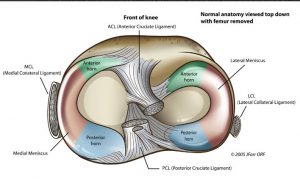 Meniscus – a unique tissue
Menisci are special crescent shaped cartilage. There are two menisci in each knee joint – medial and lateral, located one on each side of the knee. The meniscus provides a cushion between the femur (thighbone) and tibia (shinbone). The natural weight and movement of a body would cause the bones to become very close to each other, reducing the area between the bones to such an extent that their surfaces would become damaged by friction. The main task of these   is to reduce friction while moving and to absorb shocks from jumping and landing. Because the menisci help spread out the weight bearing across the joint, they keep the bones from wearing away at friction points and keep the joint in it’s natural position.

Menisci are “intended” by nature to work in coordination with our body and not cause problems. It’s not a fixed, rigid structure, but elastic and flexible, being adaptable to individual conditions. The menisci can be likened to some kind of rubbery mouldable substance that constantly adapts to various conditions. While always retaining its crescent shape, it adjusts the thickness of its individual surfaces depending on the position of the bones within the knee during any given movement. It does this because of it is constant “desire” to fulfil its most important function – the protection of the knee joint. And as the movement of dance is often unexpected and quick, the menisci are able to respond unexpected and quickly. But there must be certain limits. This incredibly collaborative joint also needs our care. It needs anatomically healthy knee use, proper knee utilisation, knee protection from “dance knee pads”, to be warmed up and prepared sufficiently before performing or training, regeneration time and quality nutrition. If it receives these elements, it does not scream for help. If not, then the pain from the knee will be heard. If this cry for help is ignored, the condition develops into gradual meniscus deterioration, followed by the deterioration of the bone cartilage and eventually the entire knee joint. Once in this state, the knee is like a car without wheels. Even though it still looks like a car, it will not carry us very far due to the friction of the road and the unpleasant screech.

With the above in mind it is clear that meniscus damage indicates we have gone too far. We also process the theme of humble acceptance psychosomatically and symbolically through our knee joints. Nowadays, we don’t have the need to bow down, be grateful, bend and humble  ourselves. The ideal of today’s times is a stubborn man keeping his head raised, a person who sometimes pushes the limits right to the edge. No wonder knee problems, and particularly meniscus damage, have gained considerable scope. The basis of meniscus injury is overload, and this disability throws light on some kind of pride and blindness. One should know their limits and realise when their efforts and performance are pushing beyond their boundaries. The inability to accept the real state, by suppressing modesty, ignoring the warning signals, especially in the form of pain, leads to the inevitable fact that (people? Human beings?) man will have problems with the menisci.

The ligaments must be firm and flexible at the same time. They have their limits and needs. If we want to execute  excellent achievements with our knees, the knees must be fully warmed up and prepared before beginning training. Another suitable option is Qigong, which brings beneficial energy (Qi) to the knees. (Read more about Qigong for movers in this blog). On the other hand, the knees are also tightened and strengthened by movement itself, respectively the movement of the knee itself supports the ligaments and tendons, their strength and flexibility. However, movement must be executed anatomically correctly. The quality of the ligaments and tendons is also enhanced by our diet, the harmonic energy of the liver, sufficient regeneration time, appropriate preparation prior to exercise and the proper anatomical movement of the knees. 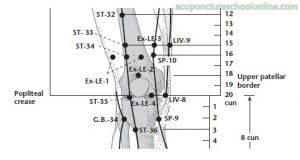 Energy Flows
I have mentioned various organs of the body that to ordinary people do not seem to be related to the knees. According to Chinese medicine, however, the meridians mentioned above align these organs bringing not only the knees but also all other joints, into play. Menisci, cartilage and knee bones are, according to Chinese medicine, replenished by energy from the kidneys. If we wish to keep them healthy, it is advisable to look after the kidneys and nourish them with a good diet and energy. The tendons and ligaments, as I have already mentioned, depend on the condition of the liver.

There are very strong energy points located in the knee areas, situated on the meridians. This means that the knees are a kind of “meeting point” for the flow of energy. This is another reason why ensuring they remain in good condition is so important. So energy can flow naturally to where it’s intended to go, but only on the condition that the knees are in a state of harmony. I will mention the most important points and their most important effects. Zusanli (ST 36) is a point located just below the knee, on its lateral side, along the Stomach Meridian.

It is one of the strongest immunostimulatory points in the body, it supports the stomach and spleen in the processing of food and its transformation to energy. In close proximity is the Yanglingquan point (GB 34) located on the Gallbladder Meridian. It is, among other things, a master point for the tendons that nourishes, regenerates and cares for their continual healthy condition. On the medial side of the knee, the Yinggu point (KI 10) is located on the Kidney Meridian. It is referred to as the biorhythm point, and is responsible for acclimatising our organism to changes in living conditions. It is often used, for example, for rapid adaptation of the body across time zones, thus helping with “jet lag”. Midpoint of the transverse crease of the popliteal fossa, between the tendons of the biceps femoris and semitendinosis there is the Weizhong point (BL 40), which, among other things, is often used for its ability to release blockages in the lumbar spine and sacrum, thereby eliminating pain in that area. 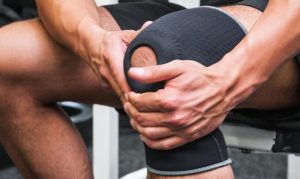 Psyche
In addition to caring for the knees with the proper anatomical use of the body, through their protection (also by using “dance knee pads”), sufficient regeneration time and good nutrition, relaxation of the psyche and awareness of certain life linking events also helps the knees. I know from my own experience as a dancer, but also as a therapist, that with initial knee problems, sometimes all you need to do is “just“ be aware of something, which may not seem important at the time. Finally, in addition to the theme of humble acceptance that has already been mentioned, I will mention one more connection, between the knees and our psyche. Symbolically, joints are a means of connecting one thing with another. They are crossroads for the circuits of Qi energy. Problems with joints occur when there is no natural interconnectedness of things, phenomena, situations, relationships … if the body doesn’t connect with the soul, spirituality with materiality, and so on. At the same time joints are also points where the Chi energy travels from one part of the body  to another, so on the psychic level this is related to the ability of a human being to form connections and be able to use them in one’s own life.

The knees of a mover