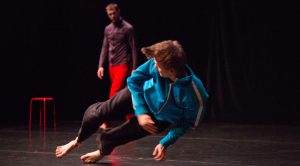 Dance piece without a story, focused on the power of physicality.

Two performers offer their bodies and their presence on the stage to go through the research of  what is the purity of their performance.
The body itself does not comunicate a straightforward story or an idea. It is a sufficient medium on its own. In fact, the clarity of movement often expresses more than the spoken word. This was what we where focusing on our creative process. The human body was the main subject in discovering unusual physical skills and virtuosity.

We were looking for a connection between music and movement, where the music and dance do not try to interpret each other but where they exist in parallel and create continuous images.