During my work in China, I encountered moxa sticks as a matter of course in the first aid kit of dance studios I visited. Chinese dancers have shown me how to use moxibustion for pain or fatigue. It is a traditional Chinese curative method of heating up acupuncture points to deliver heat and energy to the body. It represents a tremendously valuable and centuries-old summary of practical experience. It uses the knowledge of traditional Chinese acupuncture – the relationship between yin and yang, the knowledge of meridians, acupuncture points, and the system of functioning of organs and body structures that each organ has to deal with.

In practice, it concerns the use of Artemisia vulgaris herb, which is either rolled into cigar-shaped sticks of varying sizes, or, from “fluff” made of this herb, small moxa cones are manually made. The cone or moxa stick is ignited and smoldering, hence no longer burning, it is then attached to a particular acupuncture point, or placed on the point itself through some underlay (such as a slice of garlic or ginger, a sheet of paper or a coin). Moxibustion is also used on whole body surfaces, e.g. joints or longer sections of meridians. When using moxa, a substance that stimulates the nerve endings in the skin is released in the sweat duct of the skin. This activation triggers the activation of the brain and adrenal glands. They then release hormones that promote the effect of moxibustion in the body. The impact of the heat is not only local overheating but also it increases thermal and electrical conductivity at the spot where the moxa was applied, thereby affecting the energy exchange between the external and internal environment of the body, activating the skin receptors and releasing the biologically active substances from the damaged cells. The heat, as well as the essence of the essential oil from the herb, passes deep into the body and, through the acupuncture channels, fills the body with Qi, promotes its circulation and eliminates coldness from the body. If the pain was caused by cold, the pain is removed too. In cases of a cold attack, this problem without the use of moxibustion cannot be even solved.

In some cases, moxibustion is simple to apply and therefore, it is easy to be used even among dancers. The method also has the advantage that the person can apply it to him/herself. The only downside is the smoke and distinctive smell moxibustion produces For some it stinks, but there are also so-called “carbon moxa sticks” that can eliminate the smoke and smell. From my own therapeutic practice, I have had the experience that, for example, the affected sciatic nerve, achilles tendon or shoulder cannot be healed without the use of moxibustion. These are the cases when cold or wind enters these parts of the body. I have had the experience that with such problems, neither yoga nor stretching of the affected parts helps. Even physiotherapy or osteopathic treatment does not solve the problem completely. When coldness nests down in the body structures, it cannot be taken out other than this way. I have solved many chronic pains of my dancers simply by eliminating the cold, that was kept in their bodies for over years, by using the moxibustion method. 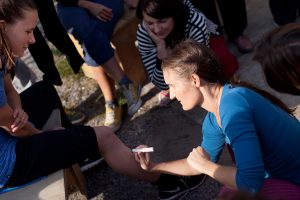 By overheating one can excellently solve acute issues such as the penetration of harmful cold and wind from the air, which cause blockages of Qi in the meridians and brings pain or numbness. Moxibustion, however, is also excellent for long-lasting, chronic diseases, digestive, respiratory, or gynecological problems. For dancers, I list a number of “dancing” issues where moxibustion can be used:

It is advisable to learn the basic techniques and methods and to learn about the contraindications of moxibustion. For this purpose, I have specially designed courses.